The Great Makeover  And the winner is... The Great Makeover � And the winner is...

If a home reflects its owner, then Sue Hansen has more glowing spirit than ever before. She just received the most cost-effective makeover of the year – to her living room, that is.    After living in the same white-trimmed red house in Old Town for 20 years, Sue never dreamed that other people would take on her quest to create a perfect living space. But with help from a handful of local business owners, she can revel in her nesurroundings.    With sponsors Irene Nelson Interiors, J.K. Wall Designers, Embellishments, Romick’s Home Collection, Chase Oriental Rugs, Ace at the Curve (formerly Steamboat True Value Hardware) and Coon Custom Electric, Steamboat Magazine offered “The Great Makeover Contest.”    Interior designer Irene Nelson was the makeover team leader, coordinating her troops and redesigning the space to fit Sue’s needs.    “I guess (the other business owners) felt like I could come up with the vision. I get more satisfaction in making an impact. I don’t do what I do for the money,” Irene said at one of the first organizing meetings. “It’s hard to live here, (so) it’s nice to help somebody.” Sue was chosen out of 12 entries because the sponsors felt they could make a significant impact with the limited budget, says Julie Hagenbuch of J.K. Wall Designers.    Each business agreed to contribute $300 to the makeover – totaling $1,500. Plus, those who weren’t selected received a gift certificate to one of the sponsoring businesses, so they can begin their own room makeover.    Sue’s living room makeover created a welcoming entrance to her home with neceiling fans, accent tables, lamps, pillows, CD tower, a windocovering and throrug. 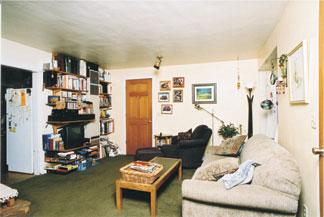 Prior to the makeover, the sofa blocked the only window. Books, movies and electronics cluttered the wall. Photo by Ken Proper   Sue and her son, Dustin, socialized with friends and family in a scattered, worn space. And as a single mom, time, money and energy were not easy to come by.   “I want a circle of friends to sit around like at a campfire. I kind of want it to be more oriented toward a family and friends’ circle – the circle of life,” Sue said days before the makeover.   But the sofa blocked the only window. Books, movies and electronics cluttered the wall. The composition was undefined. Personal photos in a variety of frame styles were scattered on walls.   In less than a month’s time, all that changed. One late summer afternoon, the hum of electric drills, screwdrivers and chattering among the store owner-sponsors left Sue feeling besieged, yet thrilled that her home was receiving such attention.    “It looked like she had fairly nice furniture so we (organized) her clutter. There’s potential here of doing a lot with a little,” Irene said confidently.    As a decorator in Steamboat for 33 years, Irene knows what makes a room glowith each person’s spirit and character. With Sue’s input, they gave the room the perfect touch. 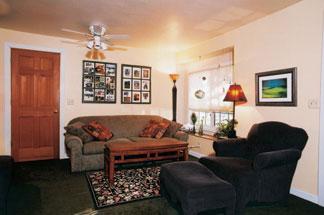 Sue Hansen's living room makeover creates a welcoming entrance to her home. Photo by Ken Proper   Irene was elated to be in charge of her assembly of business owners. She said that many times different businesses work together but usually don’t unite as a group for one specific cause.    One hour into the remodel, Sue’s living room reflected the hard work put into it, but the task wasn’t complete yet. Everyone watched the transformation while adding their opinions.    “We need a screw…grab this end…tuck the other end in here…no, not there…a little to the right, nodown a little,” the voices called out.    David Scully of Chase Oriental Rugs thought moving shelves to a different wall would create a more intimate setting. Ashley Edinburgh from Embellishments said retrieving the matching purple chair would bring better composition to the room. Tina Pelham of Ace at the Curve offered a matching light fixture and fan to blend with the decor while moving heat to other rooms. Professional electrician Geoff Coon installed the fixtures.     “If one more person would’ve been involved, it would’ve been too much input,” David says. He provided a dark wood, bench-like coffee table and an end table.     Prior to finalizing the makeover, Sue spent days in and out of stores, buying and returning. Finally, deciding the placement and orgazination of each piece miraculously clicked during the work session.    “This table looks great here,” Sue says, pointing to the quaint setting created by her helpers.     “Most people would be afraid to go in a place alone (to shop), but she just jumped right in,” says Julie, who, ironically, had rented the same house years before Sue bought it.     Without a limitless budget, being creative was a mission. Irene located three, old, nine-panel windoframes that Sue painted and antiqued to use for her assortment of pictures. Sue also painted the living room after long days at work.    “It’s so cute and cheerful. I love the color,” Kim Romick, owner of Romick’s Home Collection, says of Sue’s fawn-yellowalls.    Kim envisioned a deerskin tapestry to hide the wall heater – an eye sore that Irene also despised. She also found two perfectly-suited, alpine-style lamps to accent a corner table.    “This is what we needed. The (design) community coming together,” Irene said as everyone stood in position to move a sofa bed and attach a wall hanging.     Sue says all the preparation and hard work was worth it. Updating each room has been Sue’s goal since owning her 1930s downtown cottage. What used to be a square, red, box-like house is a home that symbolizes her “family’s zest for the outdoors, discovery and fun.”
Article Gallery [2 Images] Click Any Image To Expand