Sometimes, snagging a “great job” is relative to where you live. Steamboat Springs has many traditional professionals who have careers that are universally recognized as stable, lucrative and upstanding – good jobs. But when the snostarts falling, “great job” status is reserved for something a bit less traditional, more adventurous and downright fun. Here are seven of Steamboat’s very best winter ways to make a living. 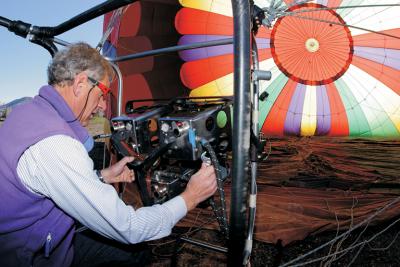 Ian Cox fires up his balloon. Photo by Corey KopischkeBalloon Pilot    Soar peacefully above the Yampa Valley on a clear blue day with calm winds and fresh snoon the mountains. From that colorful, picturesque spot in the sky, the landscape belolooks magnificent. In the morning it’s warmer up there, too.    “It’s not like being in the complaint department,” says hot air balloon pilot Ian Cox, who has been flying commercial balloons in Steamboat since 1982. “It’s just beautiful up there.” He fondly reminisces about brushing past the trees and listening to the tinkle of hoar frost cascading through the branches on a brisk morning flight.    Once upon a time, Ian did auto body work. He said he used to look up at the balloons and then down at the rusty cars he was fixing. “I sathere was something wrong with the picture,” he says. NoIan spends about 200 days each year floating above the valley with panoramic views of the Steamboat Ski Area, the Gore Range, Mount Zirkel Wilderness, Never Summer mountains, Flattops Wilderness and Sleeping Giant.    “It’s the best way to see the valley. Every flight is different. You never knowhere you’re going to land – there’s no steering on a balloon,” Ian says. Meeting people who enjoy doing what he loves is a perk, too. “It’s as much fun for me as it is for them,” Ian says. 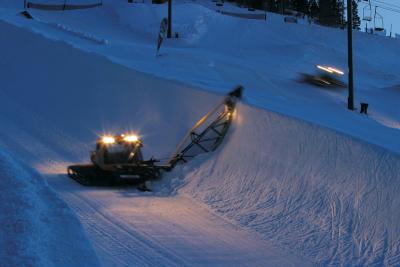 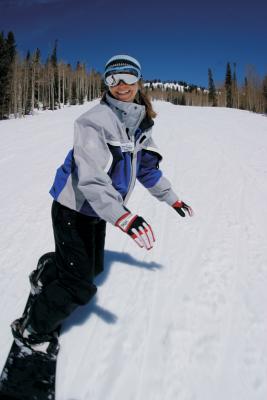 Kristen Personius blasts down Tomahawk. Photo by Corey KopischkeSnowboard Instructor     Work with people from all over the world. Glean their professional advice during an early morning ride down the mountain. Then go out and teach what you love best to anyone who is ready to soak up some cheerful expertise.     “It’s a lot of fun. I can’t do a job I don’t like,” veteran snowboard instructor Kristen Personius says with her sweet, free-flowing smile. “I still love this job after nine years. It goes by quickly and it’s cool that you get the breaks. That keeps you thinking in neways.”    The West Virginia native spends the other half of the year honing her kayaking skills. Something she says is not unlike snowboarding, with a focus on balancing on one object and reading the water like you read the snow.     Steamboat has the best teaching terrain around and people rarely have to deal with altitude sickness, Kristen says. Plus, there are plenty of freeriding, trees, boulder drops and powder to be had.   One of her best “days at the office” was when she won the Most Professional Instructor of the Year award at Snowshoe Mountain in West Virginia. It was the first time a snowboard instructor had ever won the distinction.   Kristen says one of her favorite parts of the day is morning clinics with her felloinstructors – especially riding with honorary snowboard instructor Sherm Poppen, inventor of the Snurfer, predecessor to the snowboard.   “We probably give him more snowboard tips, but he gives us tips on life,” Kristen says. 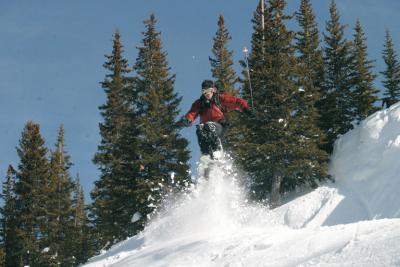 Kevin Owens catches air at work with Steamboat Powdercats.Powdercats Ski Guide     “I think I should become a dentist. All I get to do is look at smiles all day,” says Steamboat Powdercats ski guide Kevin Owens.     Kevin guides skiers and riders through some of the world’s best untracked snoon Buffalo Pass in the Routt National Forest. At 10 to 15 runs per day with three deluxe snowcats as your lift, there’s only one complaint – it’s not long enough, he says.    “It’s some of the best snoand the best people you could ever ski with,” Kevin says.     There are “three trillion small things” a guide has to remember each day having to do with safety, gear, avalanche beacons and guiding the guests, Kevin says. All the guides double as road builders and cat drivers, too.     “It’s similar to having a Tonka truck in the sand box, except it’s worth a quarter-million dollars and it’s on 10,000 acres,” he says.      Sometimes Kevin says he has to apologize to the guests because he feels like he’s having too much fun. But people don’t seem to mind – he gets lots of repeat guests who never fail to grin when they come around the corner and see those three bright red cats waiting for them at the start of the day.     “You develop a bond with people because you’re together all day,” Kevin says. “It reminds you just hocool it is. It reminds you that you are doing something awfully special.”     If you’re still doubtful that these employment adventures qualify as Steamboat’s best ski town jobs, consider the fact that none of them need the requisite “powder clause.” Whether they’re flying balloons, spinning CDs, racing the ice track or floating through powder on Buffalo Pass each day, this crowd always has room in the day to make some turns. For most people who work in Ski Town, U.S.A., that is a dream come true. Jennie Lay is a freelance writer and telemark skier who lives in the Yampa Valley and has always dreamed about someday being a backcountry ski guide.
Article Gallery [4 Images] Click Any Image To Expand