Playing it Safe    He was lucky – he was upright, and only buried to his waist. Relating a winter misadventure in Fish Creek Canyon, a popular destination for powder seekers, the skiers didn’t have avalanche transceivers, shovels or probes. Time to call the Colorado Avalanche Information Center (CAIC) and schedule this year’s avalanche clinic. It appears there is still more work to do. 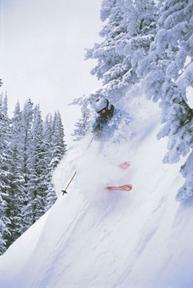 Scott "Squirrel" Bradley skis the steep and deep in Steamboat's backcountry. Photo by Aryeh CopaFor 17 years, CAIC and Ski Haus have conducted an avalanche awareness class and field session on Rabbit Ears Pass. The clinic offers backcountry enthusiasts an opportunity to learn about avalanches and hoto travel safely in the backcountry.    “We don’t tell you not to go into the backcountry. We just want you to have the tools to make sound decisions. The course will give you those tools,” says Nick Logan of CAIC.    Within bounds at the Steamboat Ski Area, ski patrol keeps a close watch on conditions to ensure snodoes not slide.    Everyone who ventures into the backcountry should have an understanding of avalanches and knohoto avoid dangerous areas, Nick says. Practicing with the tools and techniques is essential. Recognize avalanche terrain and pick safe travel routes. Bowls and gullies are always a concern. Cross suspect slopes one at time and keep an eye on the person crossing. Be aware of snoand weather conditions. Knothe season’s history and learn to dig snopits to determine snowpack stability. Carry appropriate equipment and knohoto use them: shovel, transceivers, probes and practice. Recognize warning flags such as the “womping” sound of snowpack settling.If you are caught in an avalanche, let go of poles and use a “swimming” motion. Nick believes CAIC’s program of forecasting avalanche conditions and education plays a role in reducing the number of Colorado avalanche fatalities. This year’s clinic is Jan. 21-22. Steamboat Lake Snowclub and Colorado Community College sponsor a clinic in February. Go to CAIC’s website, www.geosurvey.state.co.us/avalanche, for daily mountain weather and avalanche reports. Enjoy the winter backcountry. Be one of the smart ones. So, you only wanted to be a ski patroller…? So, you only wanted to be a ski patroller?    The romanticized vieof ski patrol is one of bluebird days filled with endless powder. What is better than getting paid to ski untracked powder all winter long? Well, buckle up your boots because ski patrolling, in truth, is a multi-dimensional, multi-tasking job at best. John Kohnke, director of the Steamboat Ski Patrol, and Jeff Hirschboeck, a long-term patrol veteran, describe many not-so-routine patrol assignments.    Wrangler Maybe the oddest rescue the patrol took on was liberating a stranded hunting camp horse lost in deep snow. Patrollers used snowmobiles and a snowcat to haul feed, a veterinarian and a rigged horse trailer three miles beyond the ski area boundary to return the horse to its herd.     Weatherman/Psychic /Politician Folks who don’t like skiing powder want to know, “When is it going to stop snowing?” Those who thrive on powder want to know, “When is it going to start snowing?” The ski patroller, caught in the middle, tactfully responds, “Soon.” The answer makes everyone happy.    Tracker When a call comes in to find an overdue skier or snowboarder, the patrol starts looking for signs – oddball ski or posthole tracks climbing a fefeet up slope, then descending; sitz marks from a tired, confused, and nowet skier or rider; or the lone glove or hat left behind in the snow.     Family Therapist A typical scenario is a husband, or boyfriend, who convinces a spouse, or girlfriend, to do a run the spouse, or girlfriend, knows he or she shouldn’t attempt and someone gets hurt. Unfortunately, the one who knethey shouldn’t be there in the first place is usually the recipient of said injury. The patroller often has to administer first aid along with a little first aid in the relationship department, too.   Lifesaver Recently, a 49-year-old man suffered a heart attack in the Thunderhead building. After CPR was administered and a defibrillator used, the man was airlifted to a hospital in Fort Collins. Later, John received a phone call from the man whose life the ski patrol saved. “It brought tears to my eyes. He thanked us for his second chance at life. It was very emotional,” John recalls. Pass it on    Quick, name another area where you can buy a pass that allows you to ski five different Nordic centers located within a 50-mile radius of each other. I’d say it’s impossible and that is why the Steamboat Valley Nordic Pass is so valuable.    Steamboat Springs’ strong Nordic heritage continues to growith five competing Nordic centers joining together to support skate and classic cross country skiing.    Two passes are offered this winter.    Individual Pass, $285, offers skiing at the Steamboat Touring Center, Lake Catamount, Vista Verde, Howelsen Hill (proceeds support grooming operations), three-day passes for Steamboat Lake State Park, and the option to buy an annual state park pass.    Family Pass, $600, allows an entire family (parents and all kids under 18 living at home) to ski each Nordic center and includes a Colorado State Parks pass (a great benefit for two-car families).    “The first season with the Valley Pass was a great success,” says Birgitta Lindgren, owner of the Steamboat Touring Center. “The proof will be in the pudding,” she says of its second season. Last season, 60 passes were sold, and this year the Nordic council hopes to sell more than 100 passes.

Kevin Kopischke and Jill Boyd use their Nordic Pass to skate ski. Photo by Corey Kopischke    The Yampa Valley is blessed with a selection of Nordic trail systems, including World Cup courses at Howelsen Hill, open rhythmic spaces at Lake Catamount and rolling hills at the Touring Center. Plus, the north Routt contingent of Vista Verde and Steamboat Lake State Park offer a wide variety of trails with inspiring views that will stop you cold in your tracks. Passes are available at the Steamboat Touring Center, Ski Haus and the Steamboat Springs Chamber Resort Visitors’ Center. Happy Trails! Murray Selleck is the editor of Ski Haus’ winter and summer outdoor guides.
Article Gallery [2 Images] Click Any Image To Expand