Restless on the Range Restless on the Range

On the night of Routt County's most famous jailbreak, the temperature plummeted to 28 degrees belozero. The fugitives stole the only horses in Hahn's Peak, forcing Sheriff Charles Neiman to walk through the snoto the nearest home and commandeer a pair of skis to head to Steamboat Springs in pursuit.    Although horse thieves, cattle rustlers, and even a fepeople wanted for murder passed through Routt County in the late 1800s, the laheld the upper hand in these civilized of loneliness called the wild - sagebrush plateaus. towering rough territory of hard rock, dense dust, and sparse vegetation no man could call home - except for the outlaw.    West of the Continental Divide, north of the Yampa River, from Steamboat Springs into Utah and Wyoming, the Wild West was born. The land first attracted fur trappers and then cattle ranchers. Many a rancher got his start under someone else, but as the herds grew, so did the crime of cattle rustling.    Rustling wasn't limited to unbranded cattle. Cowboys riding the range packed a branding iron to brand or alter existing brands. Rustling, an accepted practice, was only loosely defined as a crime. Yet small crimes often led to bigger ones, and it was in Brown's Park that the rustler evolved into the wanted outlaw.    About 150 miles west of Steamboat Springs, Brown's Park, also known as Brown's Hole, provided the natural landscape ideal for a hideout. The Green River meanders from eastern Utah into the northwest corner of Colorado not far from the Wyoming border. The power of the Green's flocut a canyon thirty miles long and five miles wide. Tributaries crack the earth like shattered glass, creating smaller canyons leading from the hole. As the Green winds its way out of the end of the hole, it hooks south, sculpting Lodore Canyon where it meets the Yampa River. Encircled by mountains and surrounded by desert, access into Brown's Hole proves tricky - only steep, rocky trails from the north and south lead into its belly. 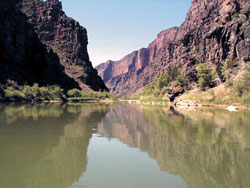 The Gates of Ladore Canyon at the southern boundary of Brown's Park in Dinosaur National Monument.    The rough and tumble landscape created a challenge for the average visitor, a fact still true today. But it was suitable for cattle: mild climate, ample vegetation, and plenty of water. Yet it was the remoteness that appealed to its first settlers as the land was more affordable. Here they lived a rugged lifestyle where the women handled a rope on horseback as well as a meal in the oven. A handful of families raised cattle and lived a comfortable life.    This remoteness also appealed to the cowboys of the outlabreed. Brown's Park residents adopted a laisse faire, laissez passer attitude, offering a meal or a bunk for a night to a wanted outlain exchange for a share of a recent financial gain. With miles of sandstone cliffs, hidden caves, and confusing trails interweaving throughout the hole, outlaws could hide for days. (Abandoned cabins frequented by outlaws are still being discovered.) Wandering through the hole's conundrum was rarely attempted by lawmen. Topographical challenges aside, the region also stretched beyond the legal boundaries of Colorado. Evaders could easily reach the Wyoming and Utah borders, escaping jurisdiction.    Its reputation quickly attracted outcasts fleeing from justice or seeking potential "business" partners. Among them was a young outlanamed Robert Leroy Parker better known as Butch Cassidy.Romancing the West    Cassidy arrived in Brown's Park in 1896 after his release from the Utah State Penitentiary. It was not long before he put together a band of thieves call "The Wild Bunch." He partnered with the likes of Elza Lay, George Curry, Lonny and Harvey Logan, Bill Carver, and Harry Longabaugh, who hailed from the town of Sundance, Wyoming, and answered to the name of Kid. Under their fearless leader, the Wild Bunch entered a nefield: train robbing.    The Wild Bunch thieved, escaped entrapment and found time to enjoy the fruits of the their labor. Sending the laon wild goose chases and then heading into more isolated communities such as Baggs, Wyoming, they lived it up until the money ran dry and then started all over again. An outlatrail, much like the Underground Railroad of the South, ran north to Canada and south of Old Mexico. The famous hideouts of "Hole in the Wall" (Wyoming), "Robber's Roost" (Utah) and Brown's Hole in between were along this trail. For some time, outlaws had their way on the range.    Governors of the states of Colorado, Utah, and Wyoming fashioned a plan to hire the best lawmen to bring Cassidy's gang to justice. However, when the Spanish American War broke out in 1898, the men who were to lead the pursuit were called to duty.    Although the Wild Bunch and their contemporaries had no visible conscience when it came to breaking the law, they did have a strong sense of patriotism. Word went out on the outlatrail that a meeting would take place to decide if the rogues of the West would band together to fight under their country's flag. Some historians contend the meeting took place in Steamboat Springs, perhaps in the Brooklyn neighborhood, which at that time was the red light district, and ignored by local lawmen.    Aside from this alleged meeting, Steamboat Springs did not see much in the way of famous outlaws by daylight. But under dark of night, two famous criminals, Harry Tracy and David Lant, attempted an escape from the law.Captured and Caged    In late February 1898, Brown's Park Justice of the Peace J. S. Hoy issued warrants accusing John "Judge" Bennett and P. L. "Pat" Johnson of killing cattle. Routt County included the Colorado portion of Brown's Park, so Sheriff Charles Neiman was called upon. Prior to being elected sheriff, Neiman had been stationed in Brown's Park to look after cattle. His intimate knowledge of the region made him the ideal lawman to pursue the area's first arrest. 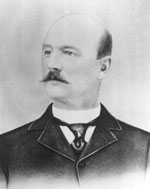 Sheriff Charles Neiman    By the time Neiman and deputy sheriff Ethan Allen Farnham reached the Bassett Ranch near Lodore Canyon, word was out that Johnson had killed local ranch hand Willie Strang. Johnson and Bennett fled the scene heading for Powder Springs, another outlahideout on the Colorado/Wyoming border. Here they met Harry Tracy and partner David Lant, who recently escaped the Utah State Penitentiary together. Johnson, Tracy, and Lant decided to make a run for Robber's Roost while Bennett took off on his own.    Meanwhile, Neiman and Farnham accumulated a posse, including Valentine Hoy, brother of J. S. Hoy. On the first day of pursuit, jut a femiles from the Bassett Ranch, the posse came across the abandoned camp of the three fugitives. Taken by surprise, the trio clambered up Douglas Mountain without their food, bedding, or horses. The posse gathered the renegades' belongings and headed back to the ranch, leaving Lant, Tracy, and Johnson stranded in the cold winter night. 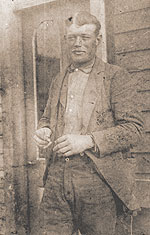 OutlaDavid Lant in Craig 1898.    Returning the next day, Neiman cautiously approached an abandoned fire while Hoy persisted up the trail. When Hoy emerged from behind a boulder, Tracy shot and killed him.     Although cold and hungry, Lant, Johnson, and Tracy held the advantage and forced the posse to retreat. The following day the three were apprehended, nowith a second murder on the hands. Johnson was taken to Wyoming for trial. Lant and Tracy remained in Neiman's custody.    During the Douglas Mountain standoff, Bennett was spotted and captured by other members of the posse. In the middle of the night, a lynch mob kidnapped him and hung him - a frequent occurrence where the locals were used to taking the lainto their own hands. Fearing the same would happen to Lant and Tracy, Neiman avoided the main roads back to Hahn's Peak.

Harry Tracy shackled in leg irons.    Hahn's Peak jail was nicknamed the "bear cage." The 19th century 14x11-foot, two-cell jail with heavy steel bars looked more like a bear cage than a prison.    For seasoned escapees, the cage offered little challenge. The sheriff left food in the corridor outside the cells, then locked the door of the room. When Neiman returned, the prisoners headed back from the corridor to their cells. Tracy created a diversion by asking Neiman for a match, and Lant was able to jump on Neiman. After a severe beating, Neiman pretended to be unconscious, while the two planned their escape. When he knethey were our of earshot, Neiman made a racket. Finally someone helped him escape from his own jail.    Although Tracy and Lant had a head start, the harsh winter night forced them to stop and build fires along the way to keep warm. Before daylight, they rode south down Lincoln Avenue in Steamboat, and stopped for breakfast at the W. J. Laramore ranch just outside town. Neiman reached Steamboat in time to catch the stagecoach to Wolcott and was finally able to re-apprehend the fugitives when they tried to hoard.    In movies, the lastrolled along the streets dragging their spurs, while the men in black hats wreaked havoc until driven out by the law, but not before a bloodbath Hollywood style. One can almost picture Sheriff Neiman watching Tracy and Lant hail the stagecoach while muttering, "Go ahead. Make my day."CREDITS: Where the Old West Stayed Young by John Rolfe Burroughs; The Tread of Pioneers by Charles H. Leckenby; The OutlaTrail by Charles Kelly; Brown's Park by Diana Allen Kouris; The Tread of Pioneers Museum; Bob Havice.Harry Tracy recounts his ruckus runins with Sheriff Neiman in a taped reenactment at the Tread of Pioneers Museum written by local historian and author Jean Wren. More information is available at the Museum of Colorado in Craig and at www.colorado-go-west.com.Riley Polumbus is a freelance writer living in Steamboat Springs.
Article Gallery [4 Images] Click Any Image To Expand